The US Open of 2022 is the 142nd US Open tennis event.  It is the fourth and final Grand Slam of the year. The Australian Open, Roland Garros and Wimbledon were held before. The US Open is an evolution of the oldest event of the United States National Championship (U.S. National Championship). It was first held in 1881, and since 1968 acquired the character of an open championship. It allows the participation in a joint event of both professional and amateur athletes. It will be held on outdoor hard courts at USTA Billie Jean King National Tennis Center in New York City.

In the women’s category Chris Evert and Serena Williams have won six titles.

The US Open 2022 will begin on Monday, August 29 and end on Sunday, September 11. At last year’s tournament more than 600,000 spectators saw their favorite tennis players up close. A record of spectators was achieved in 2019 after 737,872 spectators had the chance to watch it. Due to the coronavirus pandemic, the 2020 US Open was held without the presence of spectators.

The first favorite in men’s category to win the US Open 2022, is Nonak Djokovic. The offered odds are 2.50 at Bet on Alfa but the participation of the Serbian tennis player is not certain in the tournament yet since he in unvaccinated and therefore he has no right to enter the USA!

Last year Djokovic reached the final, where he was defeated by Daniil Medvedev. Last year’s titleholder is considered the second favorite with odds 3.05 at Bet on Alfa.

The third favorite to win the trophy is Spanish Carlos Alcarath, with 5.30 odds at Bet on Alfa. He is No. 6 in the World ranking.

Rafael Nadal with 5.50 odds, Nick Kyrgios with 7.60 odds follow and Stefanos Tsitsipas is in sixth place with 13.50 oddsat Bet on Alfa.

Nadal, Federer and Djokovic have won 20 of their last 22 Grand Slam finals. The two who “broke” this dominance are Medvedev and Tim, last year and the year before, respectively. 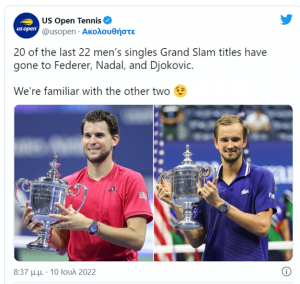 See the odds in details HERE

The first favorite in the women’s category is Iga Swiatek with 4.10 odds at Bet on Alfa. She was on a 37-match winning streak before a loss to Alize Cornet knocked her out of Wimbledon. The Polish tennis player is in excellent condition and is one of the main contenders of the US Open 2022 trophy.

The second favorite is Simona Halep with 7.20 odds. Next in 3rd place is Elena Rybakina, who conquered Wimbledon not long ago at 12.00 odds. In the 4th position we can see Naomi Osaka from Japan who won the US Open in 2018 and 2020. Her success is offered at 12.50 odds at Bet on Alfa.

Maria Sakari, who has climbed to No 3 in the World Ranking is the 14the favorite and her odds for winning the title are at 23.00 at Bet on Alfa.

See the odds in details HERE

You will of course find all the predictions at Bet On Alfa, which will cover another big tennis event with numerous blogs. We will have a clearer picture, of course, after the tournament draw takes place and the landscape with dubious entries becomes clear.

How much money will the winners of the US Open 2022 get?

The total prizes of the US Open 2022 for men and women will be over $60 million.